A SWEDISH PRIMER
Every American grows up with the knowledge that George Washington crossed the Delaware and was unable to lie about cutting down a cherry tree; that tea was dumped into the Boston harbor; that the Pilgrims came over on the Mayflower and,
later, ate turkey with the Indians...
Raised in Sweden, I have a different take on history, much of which revolved around various kings. Here is a small sampling of
what was once indelibly imprinted on my youthful mind. 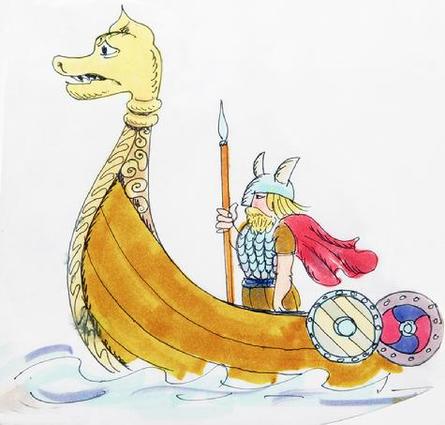 Vikings
The Swedes - unlike the Danish or the Norwegians - traveled east. They built towns along the Russian rivers, Novgorod, for instance, and ventured all the way down to Constantinople. One of them, Rurik, was picked as a leader by the Russians,
and is said to have given Russia its name. 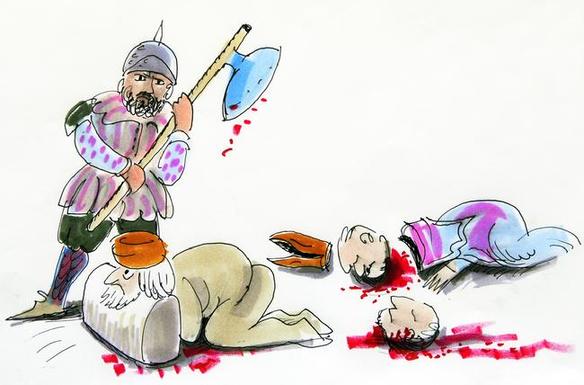 The Stockholm Bloodbath
To the Danes, Christian II was a great king who nearly beat the Swedes for good.
To Swedes, he was Christian the Tyrant, a malevolent Dane who, in 1520, instigated the Stockholm Bloodbath, ghastly spectacle in the capital's central square,
during which some 90 people were beheaded or hanged.
Would Sweden survive? It was touch and go. Fortunately, there was Gustav Vasa, a young Swedish nobleman who had escaped from a Danish prison. Three years later, after leading a rebellion against the Danish oppressor, Gustav would be elected king, establish a sovereign state, and a dynasty.
He is now thought of as the founder of modern Sweden. 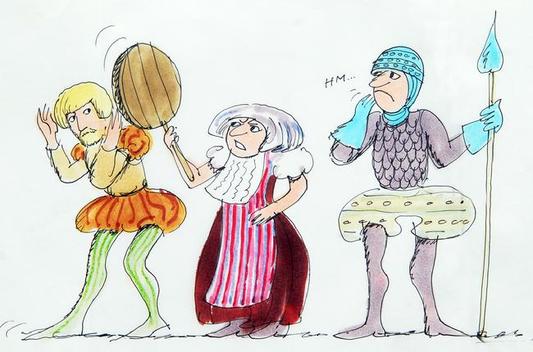 Gustav Vasa's Adventures in Dalarna
Pursued by Danish soldiers in the district of Dalarna in central Sweden, Gustav had some narrow escapes but was saved each time by some quick-witted local. Once, as he hid in a hay wagon, suspicious Danes poked around with their rapiers and spears, and wounded him in the leg. Fearing that the blood dripping from the wagon would cause a
more thorough search, the driver averted detection by making one of the horses bleed. On another occasion, soldiers broke into a farmhouse where Gustav was staying. He was about to be recognized when the farmer's wife showered him with invectives, pelted him with a baking spade, and sent him down to the cellar. Surely, a simple peasant woman would never treat a nobleman in such a fashion, so the soldiers withdrew. 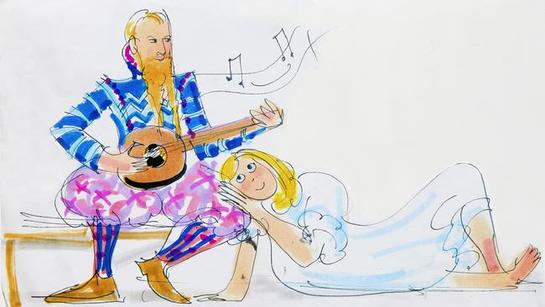 Gustav's oldest son, Erik XIV
Erik was a red-bearded, lute-playing, slightly insane monarch, whose great love was Karin Månsdotter, the daughter of a commoner. Plotted against by his brother Johann, who was next in line for the throne, Erik was thrown into prison, and died from eating poisoned pea soup. (Yellow pea soup being a national addiction,
his misadventure did little to dampen its popularity.) 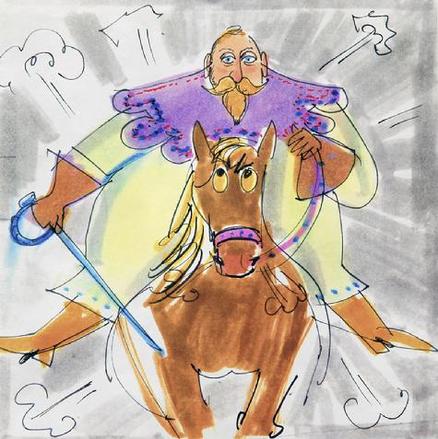 Gustav II Adolf
Everyone in Sweden knows that Gustavus Adolphus med tiden blev tämligen fet (eventually grew quite fat). More importantly, he was the monarch who fought on the Potestant side in the Thirty Year's War, and, in the Battle of Lützen, on November 6, 1632, rode into a fog, and was tragically killed. Ever since, he's been a great national hero. 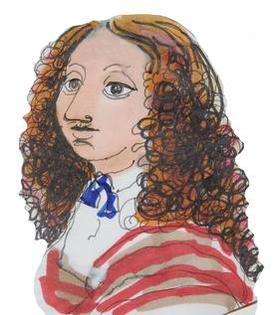 Queen Kristina
Gustav II Adolf's daughter and successor, Kristina, was only 6 years old at the time of her father's death. As she prepared for her duties as a queen, the country was run by Chancellor Axel von Oxenstierna - famous for addressing his offspring with the words: "Do you not know, my son, with how little wisdom the world is governed?"
As for Kristina, she was a highly educated woman who liked to surround herself with men of great intellect. Thus, she once invited  René Descartes for chats in the royal castle. Unfortunately, the great philosopher was unprepared for the severity of a Scandinavian winter, caught pnemonia and died while still in the Swedish capital.
Being the daughter of a Protestant champion, Queen Kristina caused a big stir when she converted to Catholicism and abdicated the throne. Her half-cousin, Karl-Gustav, took her place, and Kristina left for Rome, where she eventually settled for good. 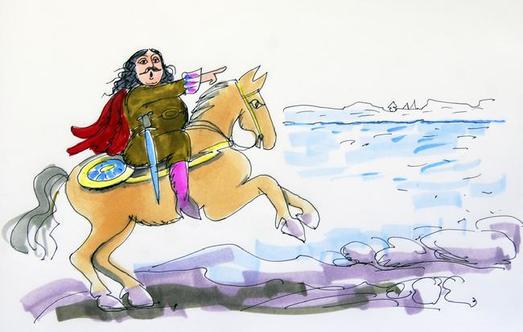 Marching across the Ice
Sweden was a on a roll. It was now the most powerful country in northern Europe. It possessed Finland, Estonia and Lithuania, and, having done well in the Thirty Year's War, small portions of Germany. An opportunity to really sock it to the Danes came when the waters around Denmark froze over in the the winter of 1657. This enabled Karl X Gustav to take his entire army across the ice and lay siege to Copenhagen. In the peace treaty that followed, three Danish provinces, Skåne, Halland, and Blekinge, became Swedish.
The Warrior King
From the Vikings on, the Swedes were known for their aggressive behavior.
A culmination of combatant kings was reached with Charles XII,
who, as a lad of 12, killed his first bear.
A king at 18, Charles XII beat the Russians in battle after battle. A great warrior, he was famous for never asking anything of a soldier that he wouldn't do himself. Eventually, after years of fighting Peter the Great, his youthful contemporary, he met his Waterloo in the Battle of Poltava in 1709, and sought refuge in Turkey. In 1714, he rode all the way back to Scandinavia. Four years later, while in Norway, plotting another war, he was struck by an assassin's bullet. The event put an end not only to him, but Swedish supremacy in northern Europe.  In a country impoverished by war, peace was then so longed for that, when a new tavern was opened in Stockholm's Old Town, it was given the name Den Gyldene Freden, the Golden Peace.  (And which now, incidentally, is Sweden's oldest and, arguably, most famous restaurant.) 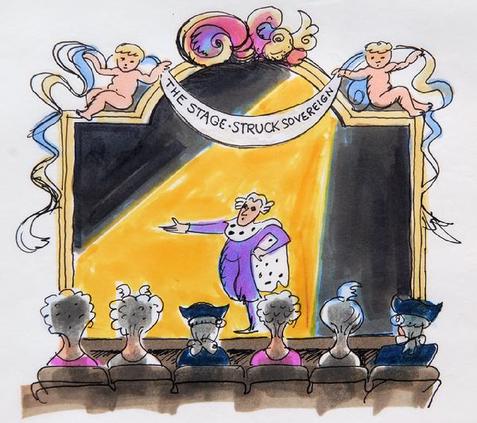 The Gustavian Age
Hearing the word "Gustavian" some people may think of furniture. I think of Gustav III, the king who brought French culture to the north. He was our Rococo king, with his own Versailles, the Drottningholm Palace outside Stockholm. A true esthete, he decided that the newly-founded Swedish Acadenmy should have eighteen members, sinde the world aderton (eighteen) had a nice ring to it. Theater was his great passion, often playing the leading role himself.  Mortally wounded by an assassin's bullet at a masked ball in 1792, his response, not surprisingly, was in French: "A! Je suis blessé, tirez-moi d'ici et arrétez-le!" (Ah! I am wounded, take me away from here and arrest him!)

The 19th and 20th Centuries
My recollection of what happened in the past two hundred years is a little blurry. There were no wars to stir a boy's imagination, and the kings seem less colorful. This, of course, is the period that early on brought the present Bernadotte dynasty to the throne. Late in the 19th centurey, Oscar II gave us the Oscarian Age - the Swedish equivalent of the Victorian era. Later came King Gustav V (an inordinately tall king who played tennis a lot), the Labor Movement, Ingmar Bergman movies, IKEA, ABBA, the welfare state,
and most recently, the Stieg Larsson phenomenon.