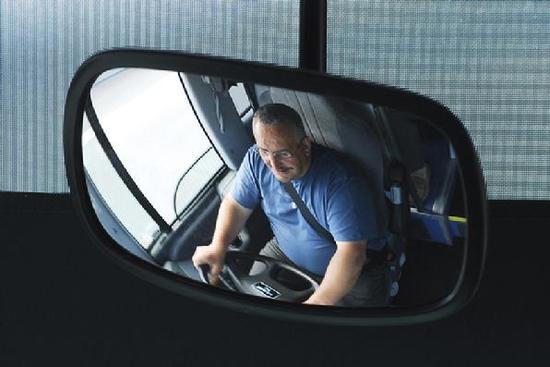 On a press trip, we traveled by bus from Lisbon to the Beira wine region
in northeastern Portugal, for a taste of wine, cheese and sweet sardines. 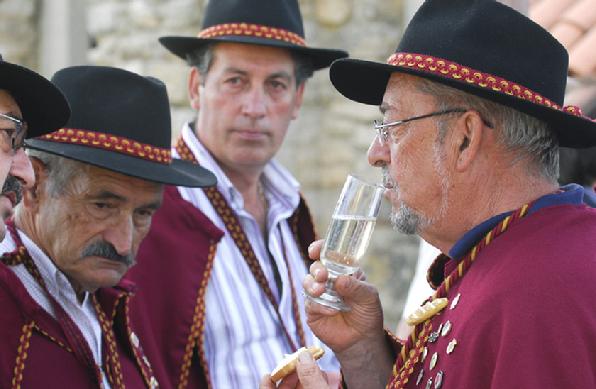 Members of Confraria dos Sabores do Bacalhau, The Brotherhood of the Codfish Flavors.
Codfish, of course, is a big item in this country.
I understand that Portugal boasts 365 bacalhau recipes, one for each day of the year. 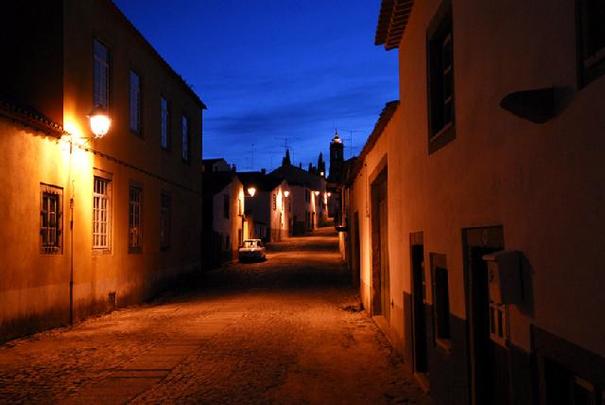 Almeida at dusk
The next day began with a sightseeing tour of Castelo Rodrigo.
Then came a wine tasting at the Santa Maria de Aguar Convent,
where Cistercian monks advanced wine-making in the 12th century. 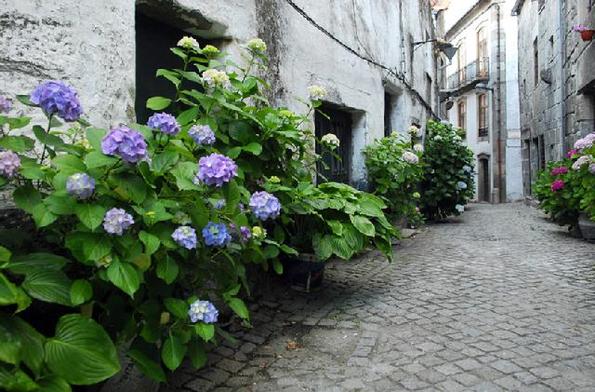 Off again. Now to the old quarters of Trancoso, where flowers lined both sides
of a cobble-stoned street. 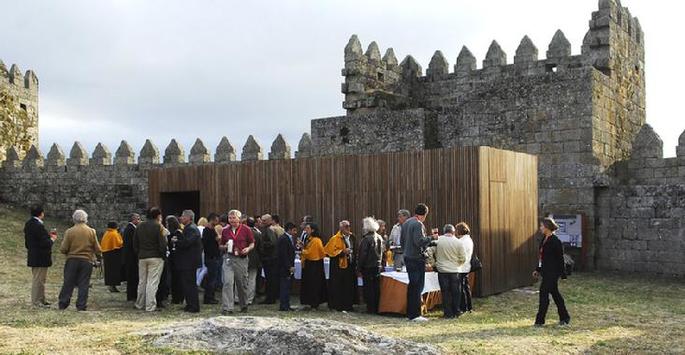 In the evening we gathered for more tasting, this time outside a medieval castle. 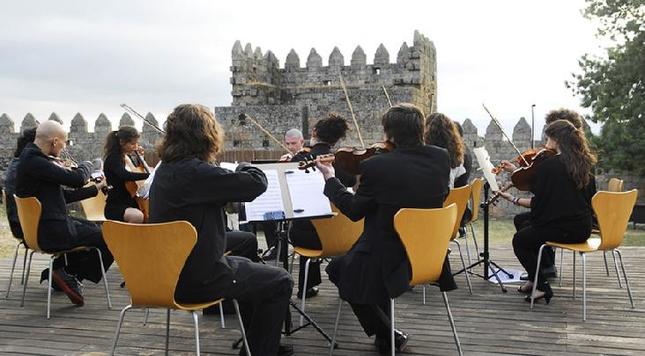 An orchestra played classical music...
wine flowed,  and here we met with members of Conraria da Sarhina Doce,
the Brotherhood of the Sweet Sardine.
(Sweet sardines? I was utterly dumdfounded, until discovering that they were pastries, shaped like fish.) 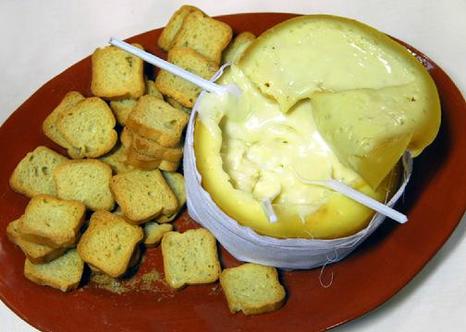 Day 3 we toured the vineyards of Quinta dos Termos and visited the cheese cooperative Bera Baxa for yet another tasting.
The Ravacal cheese, though messy-looking, was scrumptious.
Good fellowship seemed to be everywhere.
No wonder there  are so many brotherhoods - even a Ravacal Cheese Brotherhood. 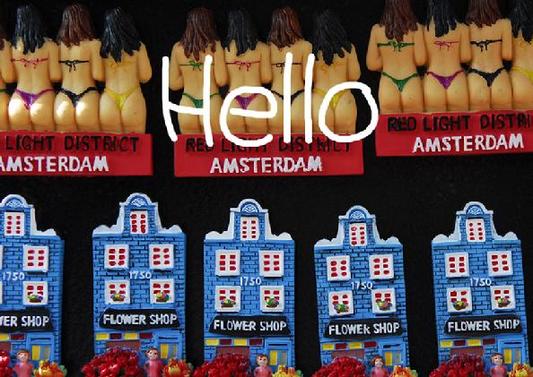 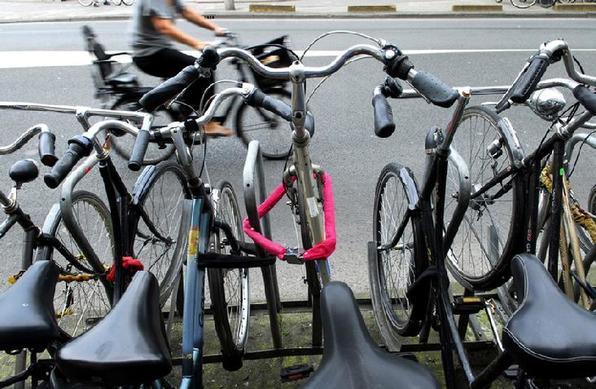 Bicycles everywhere. Thousands upon thousands of them. 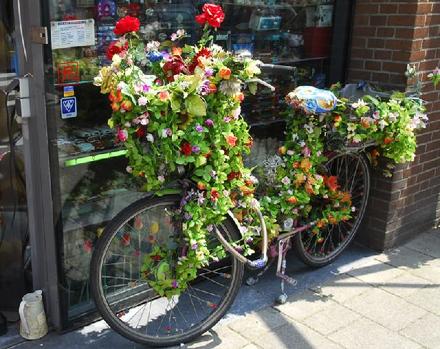 Some prettier than others. 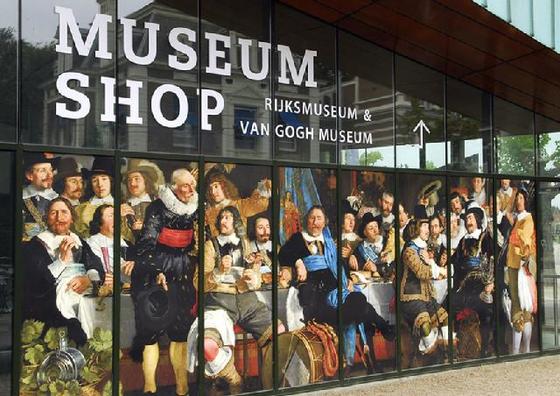 Notable museums.
Rembrandt's palette in the Rembrandt House, and,
in the "Five Flies," a remarkable restaurant, an etching by the Dutch master. 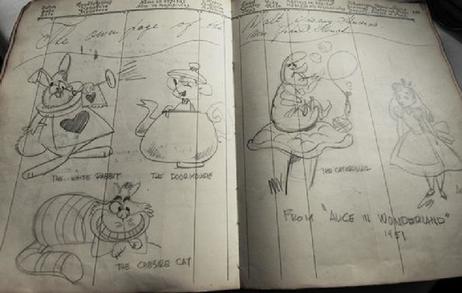 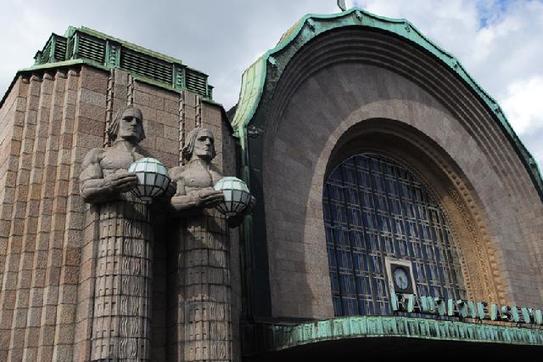 Granite-jawed and grim, the statues guarding the Central Railroad Station seemed the perfect introduction to a couple of days in the Finnish capital, dedicated to Finnish design. 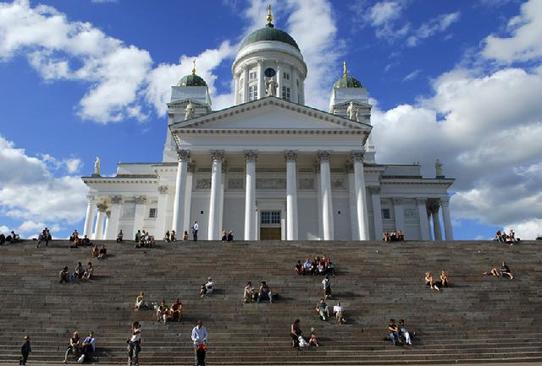 A few minutes walk, and we were at Senate Square, neoclassical, and more brilliant
than ever in the bright sunlight. 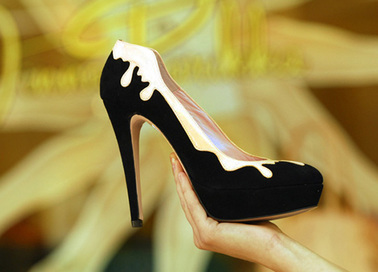 Design, design, and more design. Such as a sculpture pouring coffee on a rooftop
and one of Lady Gaga's favorite footwear.
Another pour. This time at the Glass Palace restaurant,
to the accompaniment of some designer food.
Other Helsinki dishes: salmon soup and whitefish with Beluga lentils. 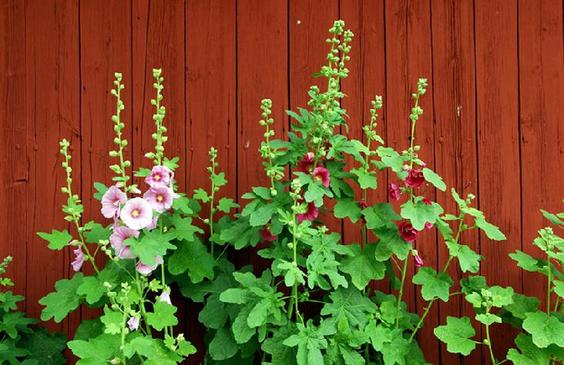 Hollyhocks in the small community of Fagervik,
encountered as, on the King's road, we wound our way to Turku. 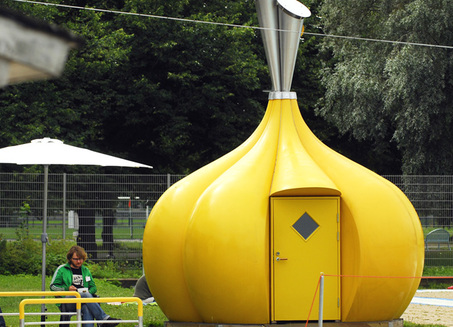 Saunas are big in Finland, not least in Turku, where we noticed some  unusual structures. One was a gray dark box, protruding over the River Aura and with an opening through which bathers could jump into the river. Another - conceivably a rave with exhibitionists and peeping Toms - was transparent, offering the bathers a clear view of the city.
Then there was the "Sounding Dome Sauna," shaped like a yellow garlic. 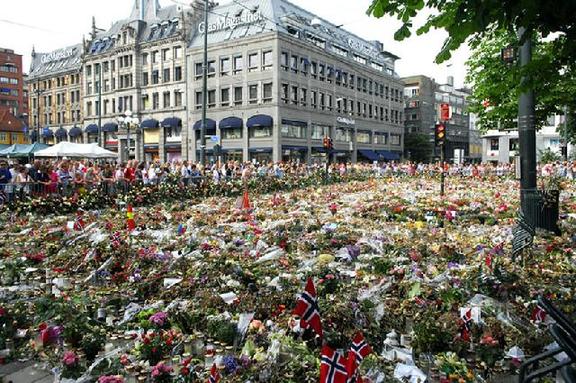 The country mourned.
Flowers, a whole square-full of them, met us in Oslo  right after Anders Breivik,
the crazed right-wing fundamentalist, went on a shooting spree, killing over 90 of his fellow Norwegians.
A night at the Opera. Or, more accurately, the Opera roof.
The Rauma Railway, first to Dombas, then to Andalsnes,
with the kind of scenery you've come to expect in Norway, 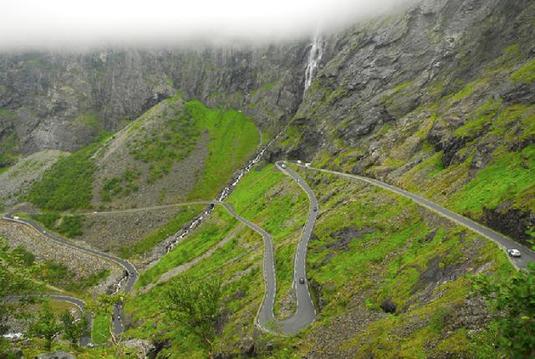 Waterfalls and switchbacks on the Trollstigen mountain road to Gudbrandsjuvet. 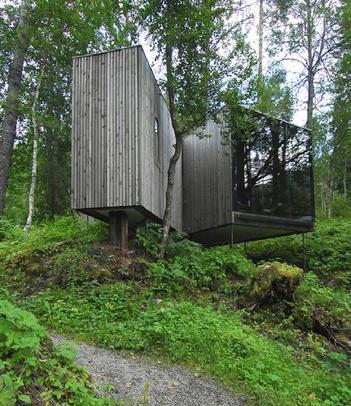 Our home away from home: the Juvet Landscape Hotel.
Steeped in nature - and with Gudbrandsjuvet close by. 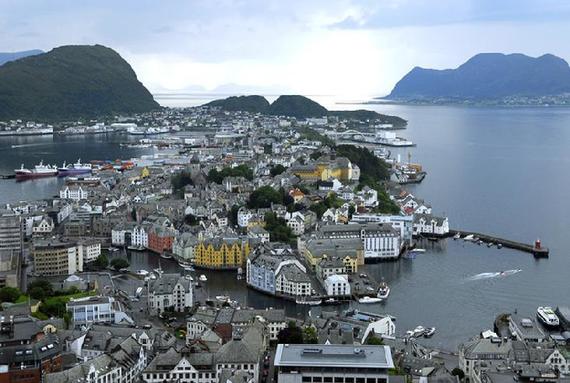 Next day: the Art Noveau city of Alesund. 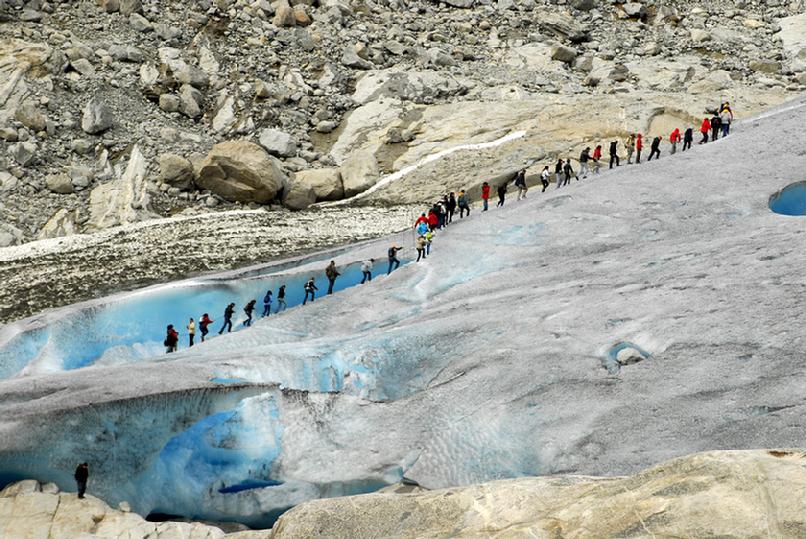 Roadblock. Stopping at nowhere. Then off to the Nigardsbreen glacier.

Germany
A Frankfurt stopover included a visit to Romerberg, the city's historic center,
complete with organ grinder.
But mostly it was about apfelwine. In a wine tavern named Wagner,
we spent an  evening with friends, and became familiar with the ins and outs of what
has been a regional feature  since the days of Charlemagne.
As we feasted on Rostbratwurstchen mit Saurkraut and Frankfurter Schnitchel mit grune sauce, bembels of apfelwine kept coming... 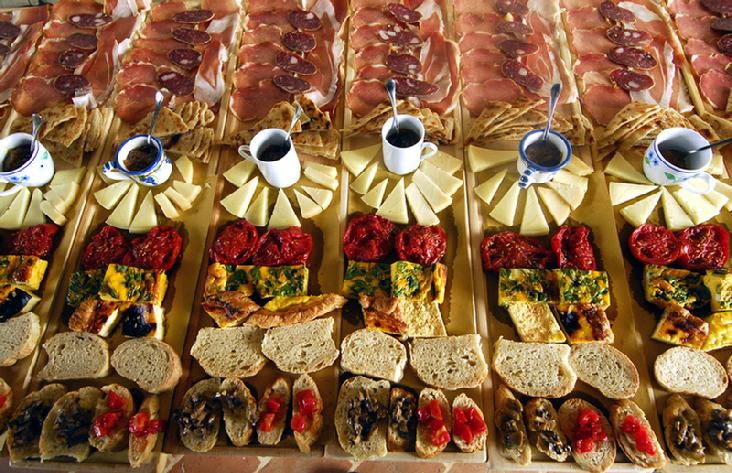 Press trip to the Marche region, with focus om culture, religion, and gastronomy
- gastronomy not least.
At Cantine Fiorini in Pesaro, these are the appetizers, with five courses to follow. 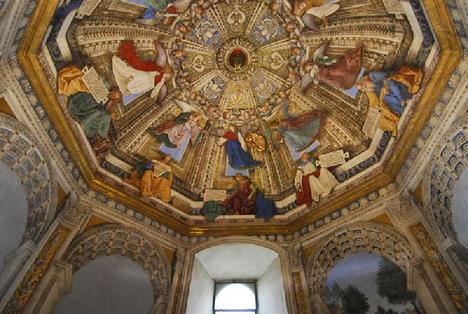 Fresco by Melozzo da Forli in the Loreto Basilica... 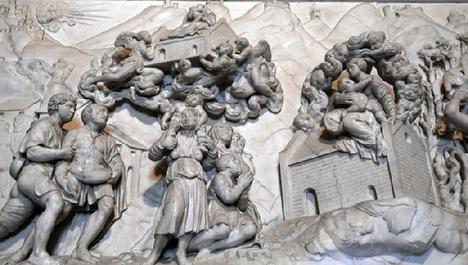 most famous for harboring the Holy House where the family of the Virgin Mary lived in Nazareth. The relief shows how angels brought it over and planted it right here in Loreto.

Gargoyles and travel companions in the square outside the Basilica.
Urbino, a Renaissance city, and, in Pesaro, Rossini's birthplace
and Medusa's snake-infested head - all of which spelled culture and history.
One of the highlights of the trip: a truffle search,
followed by truffle-enhanced dinner at Osteria del Parco in Acqualagna. 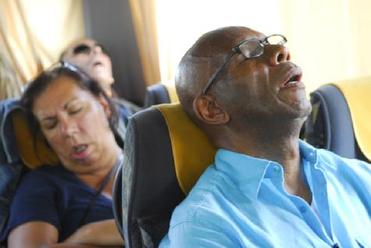 Lots of fun, but those long bus rides took their toll. 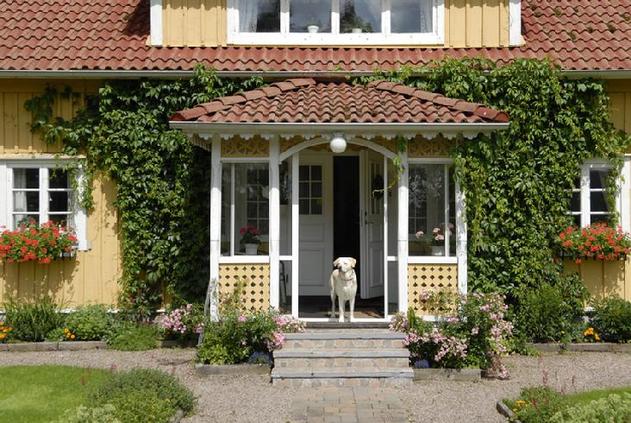 "Welcome home!"
Bonita greets us from the veranda as we arrive to the old homestead.
As on previous years, it was about family, not least the children... 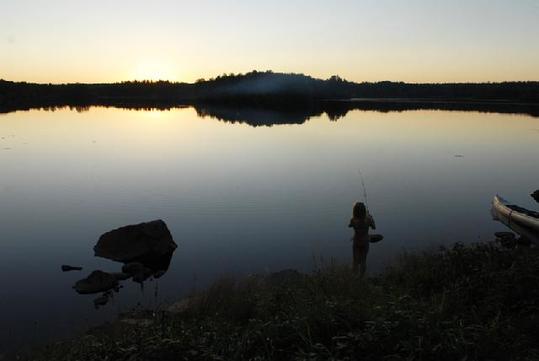