In late December, record-setting snowfalls and freezing temperatures
caused flight cancellations throughout Europe.
At Charles de Gaulle airport we found that our connecting flight to Tunis
had been canceled. Would we make it, or, since all Paris hotels were fully  booked,
have to bed down for the night in the ice-cold terminal?
Miraculously we made it - an hour past midnight, after waiting in a line for five hours.

At 3:45AM, Christmas Day, we checked in at Hotel Sidi Bou Said, 12 miles from Tunis.
All we wanted to do was to hit the sack. 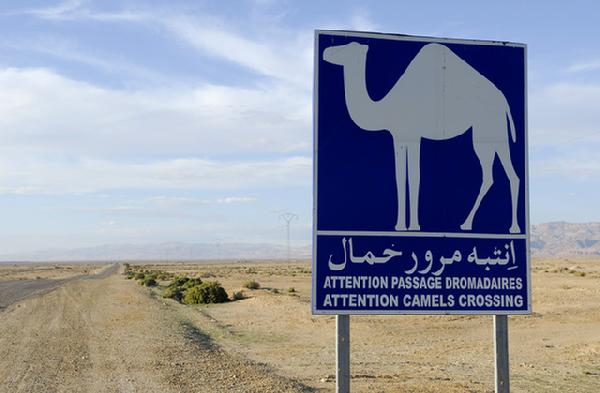 What a difference a day makes.
A short flight to Tozeur,a city in the southwestern part of the country,
and we were on a desert road, heading for Tamerza. 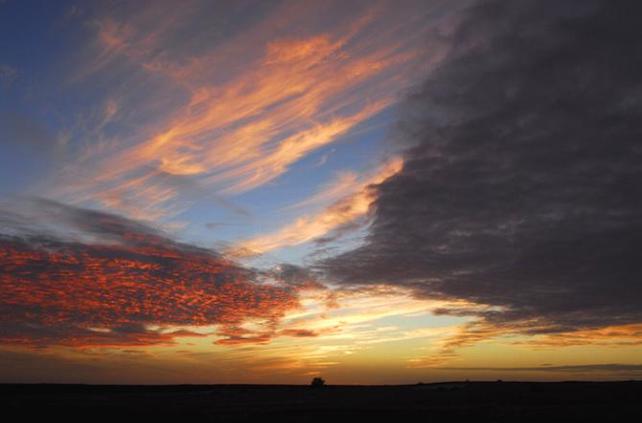 As we began a zigzag climb to our hotel, the sun set in a blast of colors.
The Tamerza Palace Hotel, our home  for the next two days, proved utterly luxurious,
and reflective of the rich Berber tradition of the area.
As Roxie luxuriated in the spa, I was content just taking pictures. 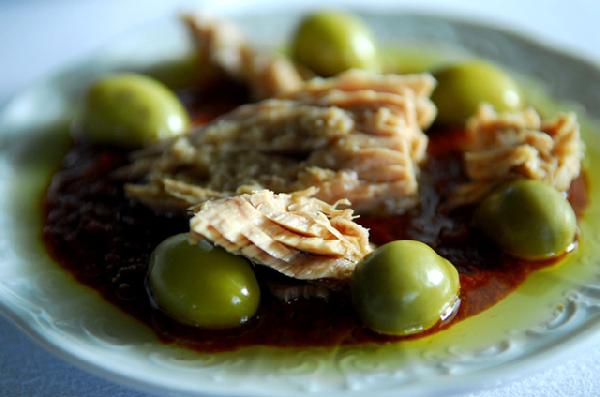 Introducing harissa, a hot Tunisian condiment,
made of crushed peppers, garlic and spices.
Referred to as "Tunisian ketchup," it came with bread, green olives,
and the most delectable tuna I've ever eaten. 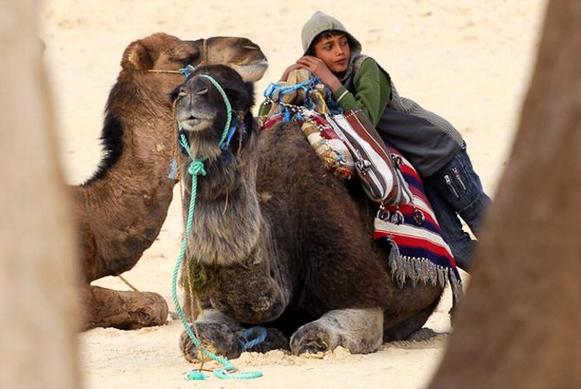 This is the setting for the "Star Wars" movies, and now a popular tourist attraction. 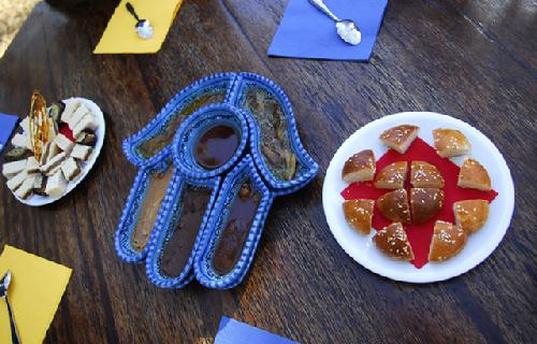 At Dar Hi Hotel in Nefta, the harissa arrived in the "Hand of Fatima."

Dar Hi is the creation of the French designer Mitali Crasset and has been described as an eco-retreat and a "sand citadel dedicated to well-being. 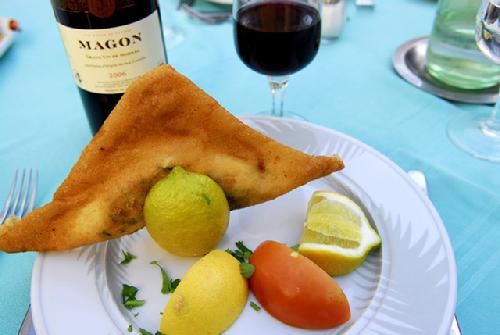 Next stop: the Palm Beach Hotel, where we were introduced to "brik,"
a thin triangular pastry, containing an egg, a chopped onion and tuna.
Delicious, but hard to eat, as the egg tended to fall out and make a mess.

Like Tamerza, the Palm Beach was a high-end hotel,
with a distinctive exterior and a lobby lush with greenery. 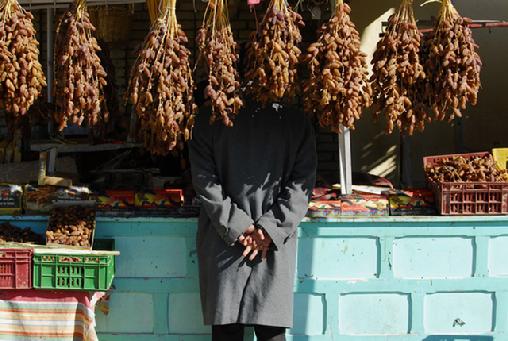 Dates are big in Tozeur, an oasis with hundreds of thousands of palm trees. 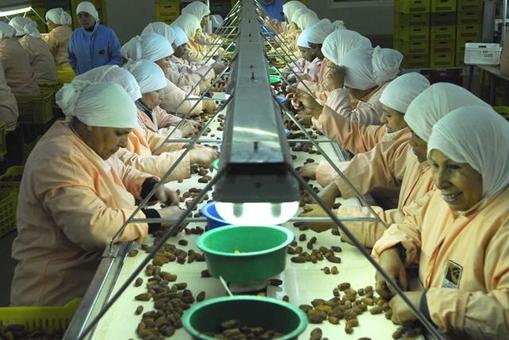 First we visited Horchani, a date factory...
then Eden Palm, a newly opened date museum,
where we watched a guy climb a palm tree, drank tea, and savored some of the
150 kinds of dates for which the area is famous. 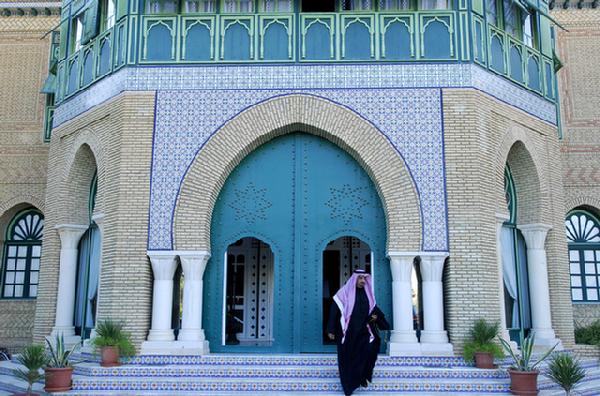 And then there was Dar Cherait, another luxury hotel and, for us, a good place to eat.

Tozeur's Oasis Festival
I had expected some colorful pageantry with wild horse and camel races;
Instead we witnessed a lyrical interpretation of a poem by
Abu Kacim Chabbi, Tunisia's national poet. 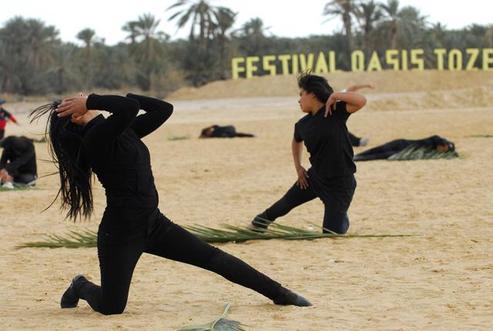 Fires were lit. Teenage girls, all in black, lay down on the sand, subjugated, yet defiant. 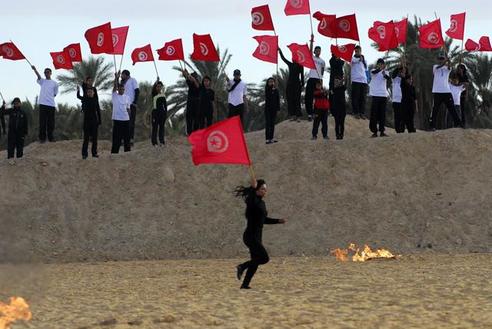 Much of the action involved the Tunisian flag, carried triumphantly by hand, or from galloping horses across the desert stage.
Sidi Bou Said 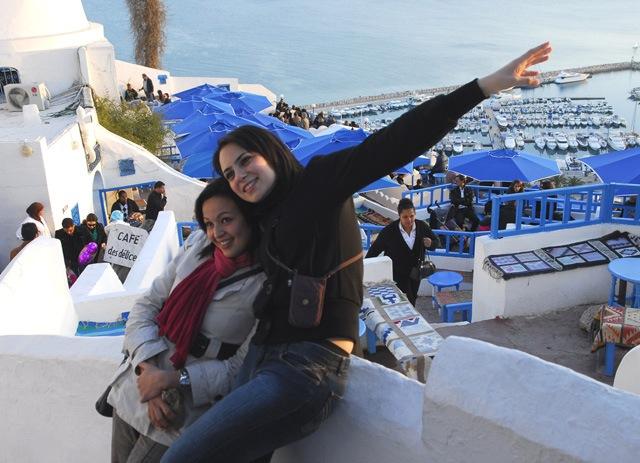 A very pretty place, reminding me a little of the Greek island of Santorini.
Not least because of it being so obviously a great tourist attraction. 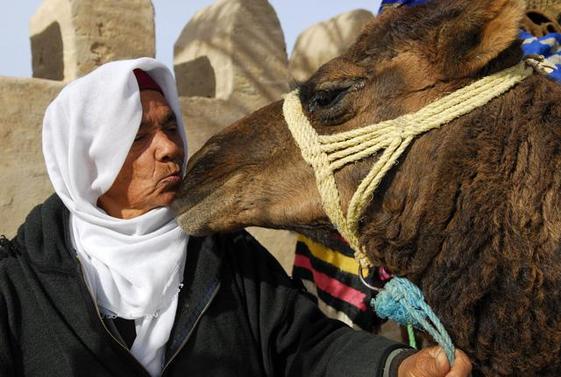 World famous for its Great Mosque - by many regarded as the fourth holiest site in Islam (after Mecca, Medina and Jerusalem) - Kairouan also featured a sociable old market place. 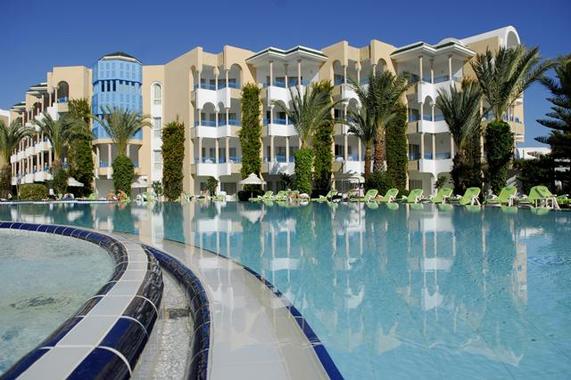 A very elegant seaside resort - has been called the Tunisian Saint Tropez.

At the National Museum of Carthage we gazed at the skeleton of a man
who lived about 2,500 years ago, and was restored by a world-renown specialist
in hominid reconstruction.
We also explored the medina (old town)...
and watched our travel companion, Globetrotter Jon Haggins, videotaping,
and our guide Wadya giving him the thumbs up. 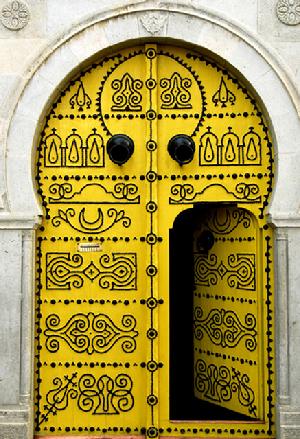 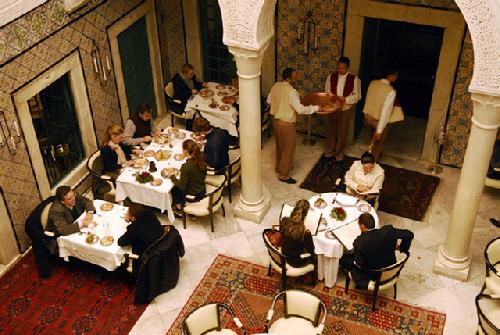 featuring a central courtyard and elaborate Moorish furnishings,
and offering traditional Tunisian food, such as lamb stew,
prawn kebabs and, not least, a variety of fresh seafood. 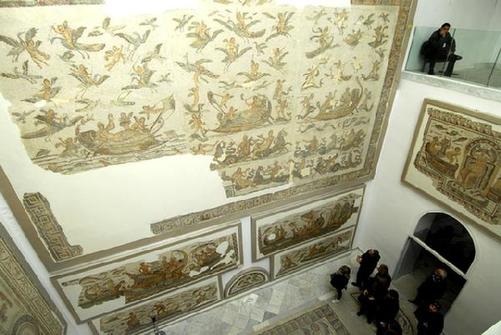 The Bardo Museum, famous for rooms full of enormous colorful mosaics
from ancient  Roman times.
Antiquity coming to life:
a wagon pulled by tigers and Venus crowned by a centaur woman. 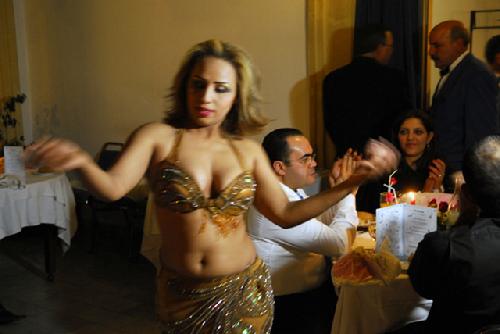 Wine flowed, an orchestra played  high-decibel Arabic  music, and a belly-dancer began
twisting and turning from table to table.
As the magic hour approached, many of the guests stood up, clapping and singing,
and, at the stroke of twelve, everyone hugged and kissed and shouted,
"Bonne Année!  Bonne Année!!!!!"


NOTE: At this point we had no idea of the pending political upheaval.
There were moments when our Tunisians friends  seemed strangely preoccupied.
But no one said anything.
All in all it was a great trip, and we hope that Tunisia will continue
to be a fabulous place to visit.