Smaklig måltid!
Bon Appétit, Scandinavian Style
﻿
Last summer, as we explored Oslo, drove along Sweden's west coast, and all the
way down to Sweden's deep south, we often paused for a bite to eat.
On our first day in Oslo we went to Tjuvholmen Sjømagasin, a top-notch eatery.
Our repast commenced with a plate of French oysters
(Gillardeau and Fin de Claire) - and a small bottle of Tabasco. 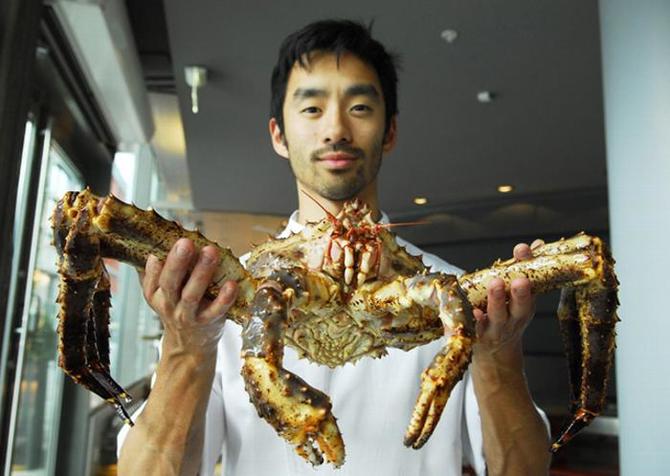 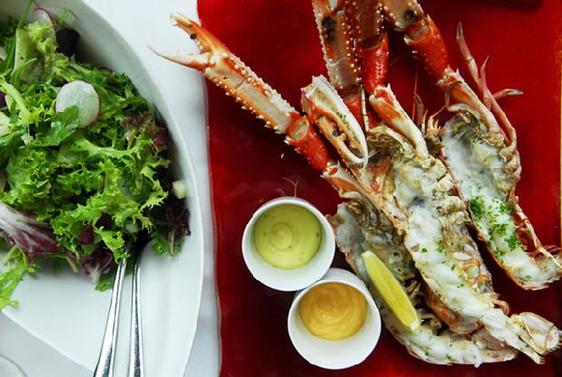 the main offering that evening.

Lunch the next day was on Aker Brygge.
The name of the restaurant: Onda, which in Spanish means "wave,"
and refers to the restaurant's undulating wooden roof. 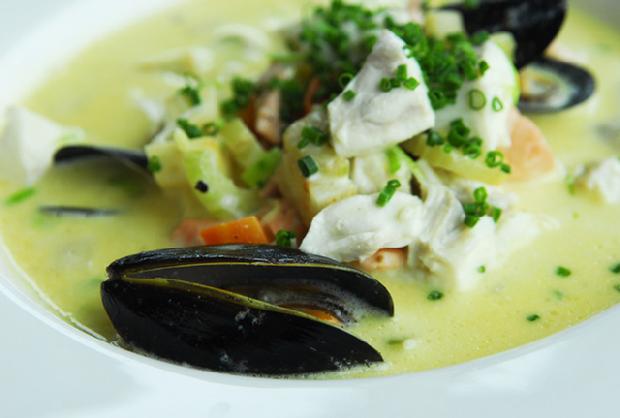 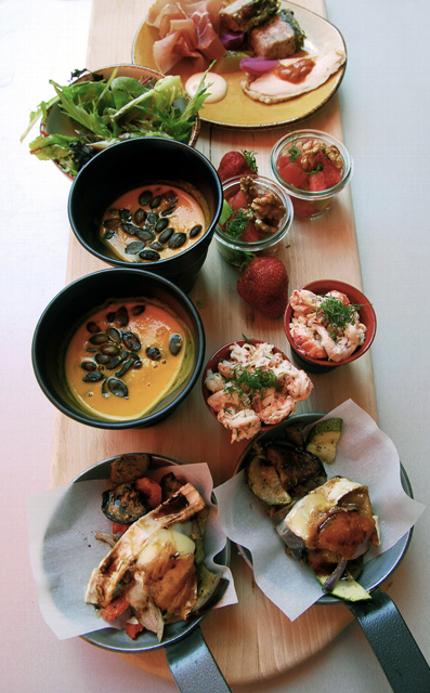 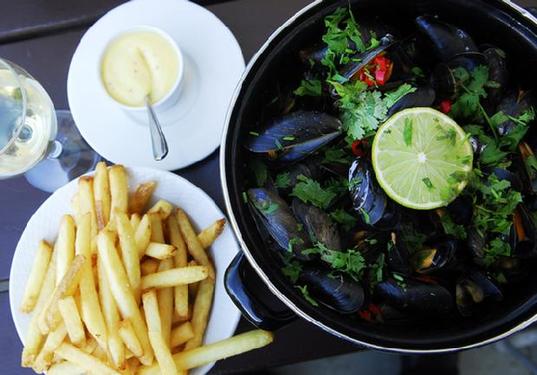 Then there was Ekeberg, with unsurpassed steamed mussels... 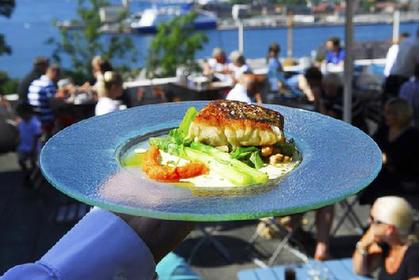 and Hake, the fish of the day...
and a great view of the harbor and Oslofjord. 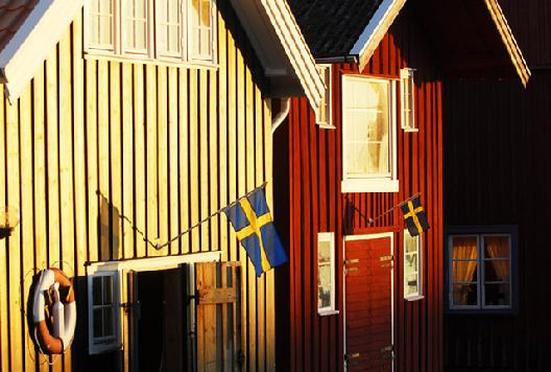 We are now in Sweden, on the small island of Klädesholmen, the herring capital. 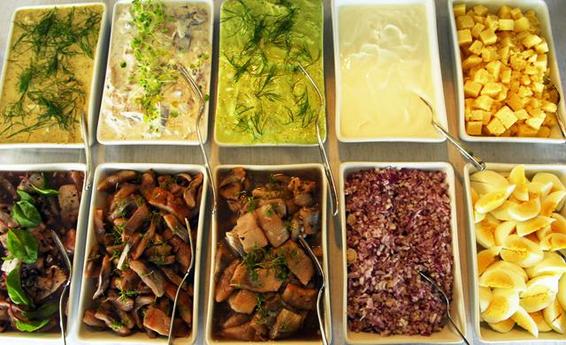 At Salt & Sill, a restaurant and the country's first floating hotel,
herring, not unexpectedly, comes in a variety of marinades. 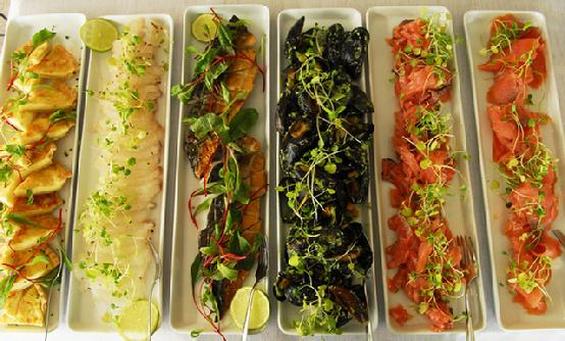 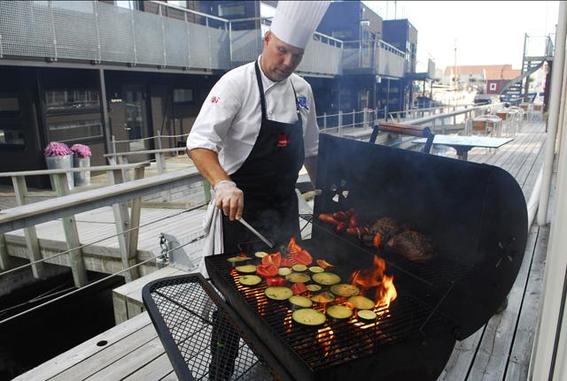 On the pier outside stood chef Tomas Andersson,
grilling meat, sausages, and bell peppers.
Dinner. After which Roxie is ready for a walk.

In Gothenburg I met with Björn Persson in his Michelin-starred restaurant Kock & Vin.
And that evening Roxie and I dined on veal entrecote and strawberry cake
at restaurant Familjen, Björn's latest venture. 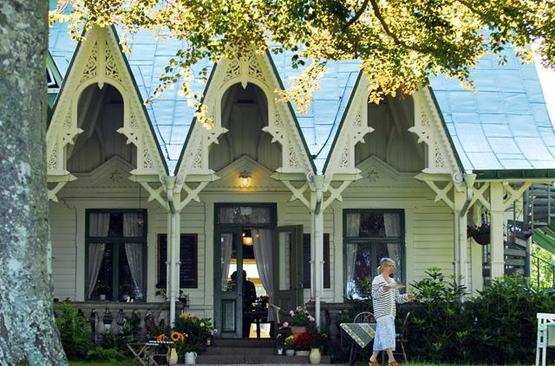 At Villa Sjötorp, we find ourselves in the bygone era of national romanticism
and gingerbread houses. 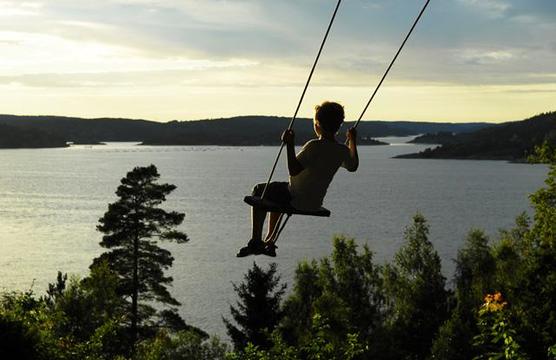 From  the veranda, in the soft evening light, we watch a boy on a swing.
Meanwhile, the chef prepares the opener, carpaccio
with baby watercress and lingonberries.
After which comes the main dish: shrimp cassolette.

In the southwestern corner of Småland,
just a few kilometers from where I grew up, we discovered Gräddhyllan,
a café with an abundance of pastry, homemade cakes and other indulgences. 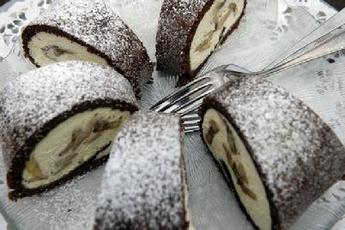 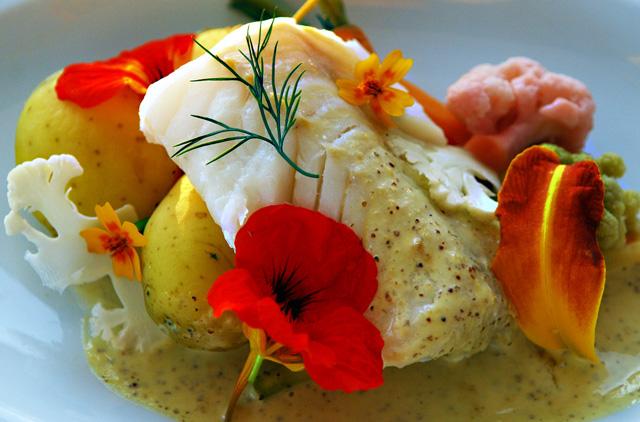 At Salt & Brygga, an ecological and stylish restaurant in Malmö,
we were served cod fresh from Lofoten, decorated with the owner Björn Stenbeck's own homegrown edible flowers, such as daylily and slingerkrasse. 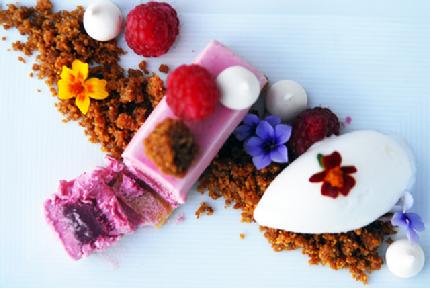 Bastard, another Malmö restaurant,
described variously as a "hotspot for Malmö foodies" and "hipster heaven." 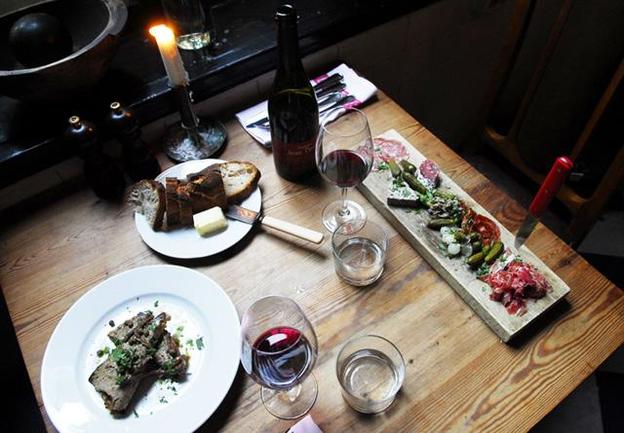 For an appetizer I chose the restaurant's famous cold platter - Bastadplanka -
a signature dish that comes with a knife sticking out of the wooden plank.
Roxie picked the chicken liver paté with capers and anchovies.
All delectable , and complemented with a glass of organic Cotes du Rhone wine. 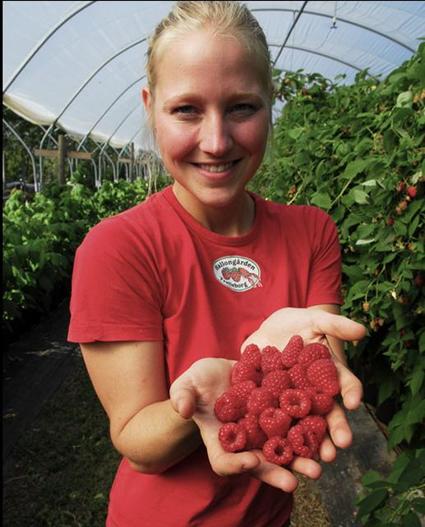 In Ystad we lunched at Sandskogen's Inn,
another gingerbread house with good hearty food...
from bleak roe with red onion and créme fraiche to beef filet with horseradish
and oven-baked parsnips. 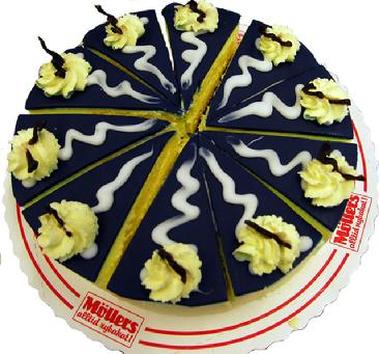 In Ystad, folowing in the footsteps of Henning Mankell's fictional hero Kurt Wallander
has become quite the thing to do for visiting mystery fans.
So why not get a slice of "Wallander" cake?